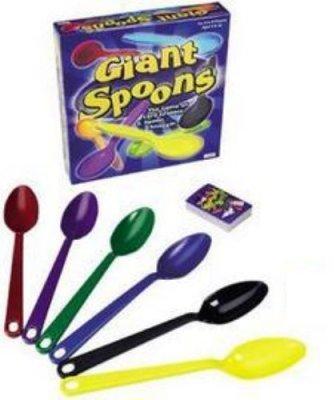 The Spoons game also known as Pig and Tongue (ages 7 and up) is a fast-paced matching game played with an ordinary pack of playing cards and several ordinary kitchen spoons. The game requires players to have a sharp mind and stay focused and helps them develop concentration skills.

Spoons is designed for children ages 7 to 11 but even older children can enjoy it. This card game is played in multiple rounds by up to ten players therefore it is also a good family game.

Rules of the game
Each player’s objective is to be the first in the round to have four of a kind or not to be the last to grab a spoon. Cards are shuffled and four cards are distributed to each player. The Spoons are placed in the middle of the table.

When a spoon is take, all the other players attempt to get the remaining spoons. The last player to grab a spoon is the looser. The looser is eliminated from the game. To play another round, four cards from the deck are removed.