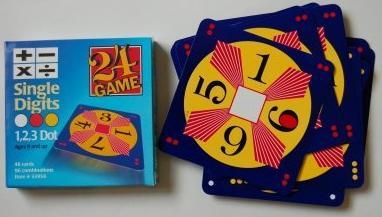 RECOMMENDED AGE: 9 and up
SKILLS: MATH

•  In the Math 24 card game, players practice basic mathematics facts.
•  Suitable for grades 3 to 5.
•  Fun card game that even adults can enjoy.

The Math 24 card game is a fun game that helps kids practice basic mathematic facts and mental math.The objective of the game is to come up with the number 24 (hence the name "Math 24"). Players have to use four integers (number 1 up to number 9) and addition, subtraction, multiplication and even division in order to achieve this objective.

Cards containing four integers are distributed at the beginning of the game. Players have to come up with a way to reach the number 24 using addition, subtraction, multiplication or division. The player that manages to find the number 24 the most times wins the game.

Math 24 is educational as it helps kids practice mental arithmetic. "Mental" because no pen or paper are allowed. The game has even been used in the classroom by school teachers in order to help their students practice basic math. By the way, Math 24 is suitable for students in grades 3, 4, and 5.

The game has received a lot of positive reviews from both parents and teachers. Actually many parents have been surprised to see their kids math score improve.

There are many versions of the game that you can get:

Math 24 is also a great travel game and it is a game that adults can also enjoy.

Buy It Right Board Game


Return from Math 24 Card Game to Math Games For Kids